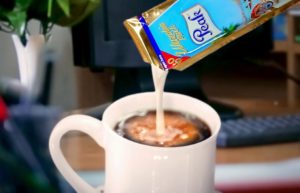 Evaporated milk, known in some countries as (unsweetened) condensed milk, is a shelf-stable milk product with about 50-60% of the water removed from fresh milk. Evaporated milk has a shelf life of 12 months without the use of preservatives. The long shelf life is possible due to the retorting (heating) process that is used in its manufacturing. This makes  ‘evap’ very popular  as a safe and reliable substitute for perishable fresh milk which requires no refrigeration prior to opening. It is also easily shipped to locations lacking the means of safe milk production or storage.

How is evaporated milk used?

How is it different from sweetened condensed milk?

Evaporated milk is concentrated milk without the addition of sugar, whereas sweetened condensed milk (SCM) contains substantial amounts of added sugar, which is used to preserve the product (e.g. like in jam). SCM consequently requires a less severe heat treatment since the added sugar inhibits microbial growth. Evaporated milk, instead, needs to be sterilized by heating by which micro-organisms are killed.

How is it made? 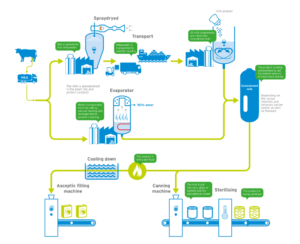 What about the nutritional value?

When mixed with a proportionate amount of water, evaporated milk becomes the rough equivalent of fresh milk. Because of the heat treatment vitamins B2 and B12 will be lower, but the amount of proteins and minerals are comparable with fresh milk. For some countries some extra vitamins, such as vitamin D and A, are added to the product.