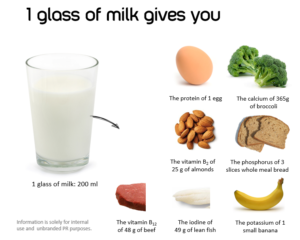 Protein: Milk protein is a high quality protein. That means that it contains all essential amino acids in a right balance. Because of the high quality of milk proteins, milk and dairy products are a valuable source of protein in a healthy diet.

Carbohydrates: All milk from mammals, including cow’s milk and human milk, contains only one type of carbohydrate: lactose. Being a carbohydrate, lactose delivers energy. That is probably the most important reason lactose is present in milk (to deliver the new born energy it needs).

Fats: Milk contains fat: raw milk naturally contains about 4% fat. In most countries the fat in the milk that is sold in  supermarkets  is standardized. The fat composition of milk fat is very complex; there are a lot of different fatty acids and other fat components available in milk, most of them in small amounts..

Vitamins: Raw milk does contain several vitamins, some in a very low dose and some in relevant amounts. Vitamin B2 and B12 are the most important, because they are available in significant amounts. Both vitamins play a role in the functioning of the nervous system, which is important because the nervous system tells your body what they have to do. A lot of nutrients are involved in the functioning of the muscles and vitamin B2 and B12 are two of them.

Minerals: Milk naturally contains 4 minerals; Calcium which is needed for the maintenance of strong bones and for the growth of bones in children. It also contributes to the maintenance of healthy teeth and plays a role in muscle contraction, nervous function and blood clotting; Phosphorous which contributes to strong bones and supports normal energy metabolism; Potassium which aids functioning of the  muscles and the nervous system and plays a role in maintaining a normal blood pressure; and Iodine supports thyroid function, the nervous system and the energy metabolism.

To find out more, visit https://www.informilk.nl/milk-dairy/the-nutrients-in-milk/